Advocacy in the Age of Peak Guilt

Yesterday, I spent the day at the Awesome Summit — the first wholesale gathering of folks involved with the Awesome Foundation. In case you don’t know, the Awesome Foundation is a “micro foundation”, where each month, a group of 10 “micro trustees” donates $1000 (total; $100 per trustee) towards a project that is awesome.  No strings attached.  It’s a really neat idea, and it has caught fire over the last few years.

At yesterday’s summit, I was on a great panel, entitled “The End of Peak Guilt”. We talked about alternatives to guilt-driven advocacy — new ways that folks can engage in ways that are creative, fun and social.  The panel moderated by Alexis Ohanian, and featured some great folks: Zach Walker from Donors Choose, Andrew Slack from the Harry Potter Alliance, and Michael Norton from the Harvard Business School.

For my part, I talked a little bit about what we’re doing with Connected.io, and did a quick roundup of examples that I feel exemplify guilt-free advocacy.

There wasn’t a video of the talk, so I did a little experiment and created a voiceover video of my slide deck.  I recorded this today, and I’m sure I didn’t deliver this with the same gusto as the live talk, but I figure it’s better than simply posting to slideshare.

Side note: in the process of doing this, I realized that there really isn’t a good enough way to share presentations on the internet.  People spent countless hours preparing decks and presenting talks — and some of those are recorded and shared, but the vast majority get lost in the wind.  Slideshare has a ton of presentations, but they just feel crippled to me without the voiceover.  I feel like they have so far missed a huge opportunity to create a deep and interesting content channel.  SlideRocket has the generally right idea (in-situ editing, easy audio recording, interactivity, etc.) but they take a super proprietary approach to their service which really turns me off (I should write about that in more detail).

Anyway, that mini-rant out of the way, here’s the voiceover video (which also doubles as the media component to my SXSW panel proposal): 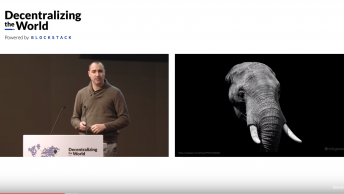