Over at TOPP, we’ve been talking recently about the “spectrum of engagement” — in other words, providing a variety of ways that people can engage with a website, ranging from quick & easy (e.g., thumbs-up-ing something) to slow and involved (e.g., writing a blog post or signing up for an account).  It’s obviously important to give people opportunities to engage at whatever effort/thought level works for them at a given time.

Along these lines, we’ve been talking about the role of “structured inputs” in facilitating various types of interactions.  Interactions that are quick & easy are often (but don’t necessarily have to be) more structured — for example, signing a petition, filling out a multiple choice survey, or marking yourself as a “fan” of something.  Of course, there is a tradeoff here — when you impose structure, you make things easy at the expense of flexibility and power.  More open systems offer often limitless possibilities (think of all the ways you could use a wiki), but usually take a more invested set of power users to explore these and set cultural conventions (think twitter hashtags).

Another downside of too much structure, that I encountered today, is that it can often result in an abundance of meaningless data.  Let me give an example:

An example:  In what will likely prove a fit of hopeless optimism, I’m going to buy a pull-up bar for our bedroom door.  As it turns out, there are a lot of options — bars that screw in to walls, bars that use horizontal tension (like a curtain rod), and big multipurpose bars for pushups, situps, and pullups.   I think I want the kind that doesn’t screw in, and I know I don’t want a big piece of equipment.  So, the question is, which is the best one?  Where to go but to the customer reviews.  And finally, to my point.

First stop: Dick’s Sporting Goods.  As I flipped through the reviews I noticed that they all used many of the same words, and that none of them really said very much. 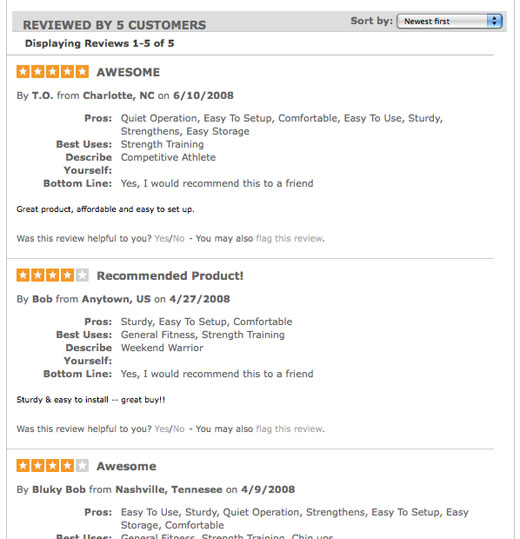 Lo and behold, they provide a structured form for feedback, complete with checkbox suggestions for “pros” and “cons”. 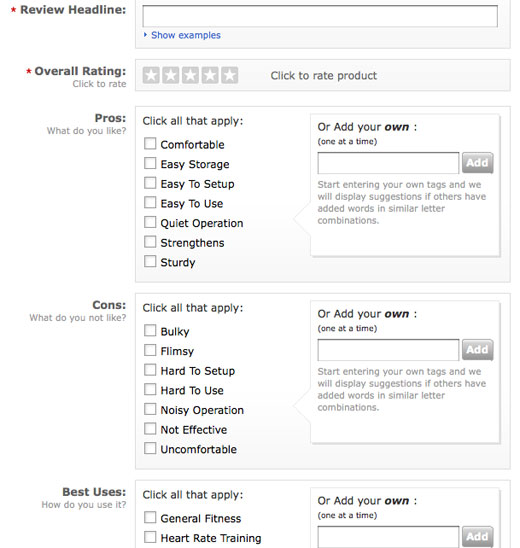 So, instead of actually writing anything meaningful, they just check a few boxes and are done with it.  There is a general comments field, but apparently no one takes the time to fill it out once they’ve checked those boxes off.  In the end, this approach attempts to make things easy for the reporter, but the end result for the next shopper is a set of reviews that really don’t say much.

Second stop: Overstock.  Similar product here, but when I get to the reviews, I see several pages of thoughtful and helpful reviews.  People dealing with the exact same questions I was facing.  Sweet!  So helpful.

Looking at the overstock review form, you see a different story.  Rather than pre-thinking for the reviewers, they ask for ratings on general quality and then a detailed description. 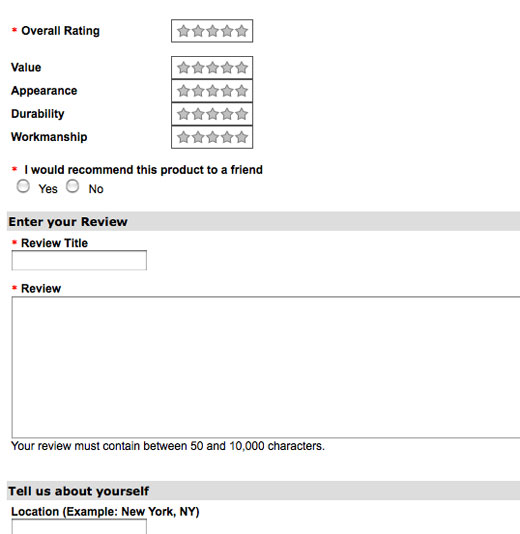 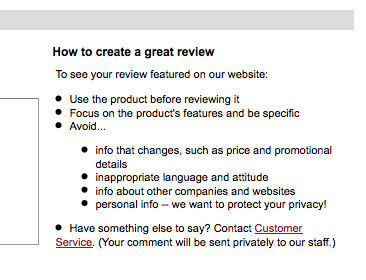 In addition, they provide instructions on how to write a great review.  These instructions also imply that bad reviews won’t be featured on the site, introducing another mechanism of motivation — getting your review published.

This is kind of a cop out, but…
The Butter Thesis
The Freedom to Tinker